Leaders from 64 different churches have committed to tackling sexual and gender-based violence in their congregations and communities during 2021. 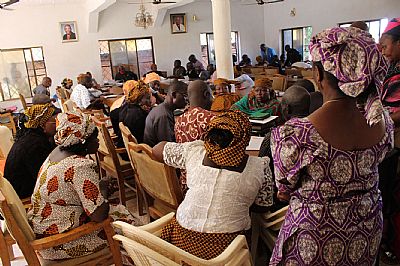 They will be talking about sexual and gender issues from their pulpits, explaining that women and men are equal before God, and role modelling gender equality language and behaviours.

The pastors of each of these churches, along with their wives, attended Grace & Light sexual and gender-based violence workshops. The first, in November, was for ECWA church leaders in Miango district. The second, in December, was for churches in Kuru.

During each workshop participants explored the biblical perspective on sexual and gender-based violence, root causes, particular issues in their congregations and how to resolve these.

“Until now the church leaders had kept quiet about this type of violence, believing that rape, incest and wife beating were for the family to resolve privately and that the church should not intervene,” explained international coordinator Tassie Ghata. 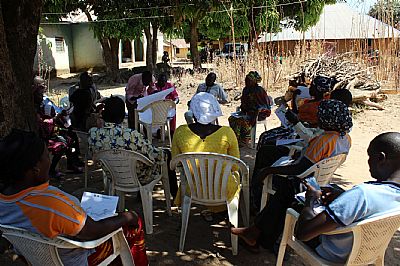 “Now they will no longer keep quiet. Instead they will be speaking out and intervening. They recognise that the cultural norm of men being superior to women is not of God.”

Kuru is a group of small semi-developed villages and hamlets 20km from Jos. Here Tassie and the team also spoke about HIV, poverty, work and corruption with the church pastors and their wives.

“As leaders we sometimes keep quiet when rich people in congregations do wrong. The pastors recognise this is ungodly and from now on will be reminding those who are wealthy to use their money to serve God and help the poor in their communities,” said Tassie.

The Kuru and ECWA pastors have committed to inviting the Jos volunteer team to minister to their congregations during Sunday services in 2021. 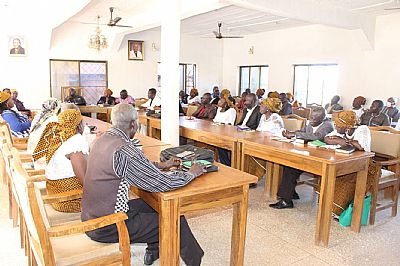 Please pray for these pastors that they will remain faithful to God and the promises they made during the workshops; the Jos volunteer team as they arrange Sunday service visits to the churches.

Cocin churches in Vom have agreed to invite the Jos volunteer team to minister during Sunday services following a meeting with the Vwang District Regional Church Council. 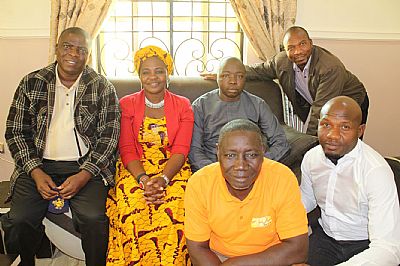 The volunteers will begin visiting the more than 40 Cocin churches in the district from January. They will share the gospel of social righteousness, calling on congregations to lead righteous lives that honour God, as well as counselling then testing everyone who wants to know their HIV/ AIDS status.

International coordinator Tassie Ghata and programme officers Pofi Josiah and Alfred Mshelizah travelled to the town of Vom to meet Cocin’s Vwang executive team in mid-November. Vom is a 50 minute drive from Jos.

Tassie, Pofi and Alfred explained Grace & Light’s purpose, our focus on social righteousness and how we work with local congregations.

“It was lovely to meet again the chairman Rev Davou Rapp,” said Tassie. “Fourteen years ago he was a Grace & Light volunteer in Jos while he was studying at TCNN. He already knew about our HIV work, now he and his team know about our social righteousness focus also.”

Please pray for safety for Jos volunteers as they travel to and from Vwang; church leaders to invite the volunteer team to their Sunday services, congregations to be open to hearing the message of social righteousness, people to join a local Grace & Light volunteer team.

Jos residents arrived in their droves to buy books during our annual book fair where we sell Christian books at very affordable prices. 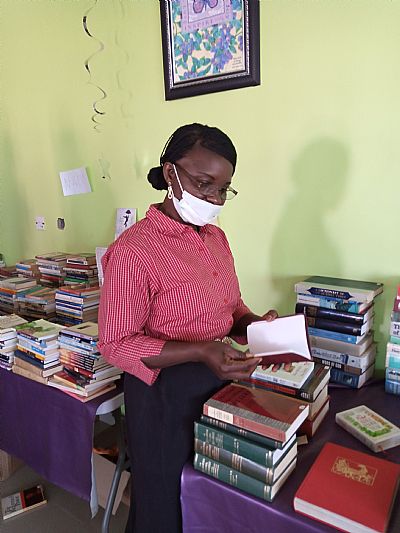 People came not just from Jos, but also from nearby towns and villages as our book fair is highly regarded by local people.

They go home laden with piles of books to read in the months ahead. Everyone who comes is able to buy three books and receive a fourth for free.

This year the book fair was held over two days, 19-20 November, both inside our headquarters charity shop and in the garden around the building.

This raised N1.5m, equivalent to £3,000. International coordinator Tassie Ghata and the Jos team are delighted as we beat our N1m target by 50 per cent.

The money is going towards construction of a water tank for the new training centre currently being built. The water tank will store water pumped up from our bore hole.

Tassie said “Everyone who comes says ‘wow’. There are so many books for sale and they are cheap by Nigerian standards so anyone can buy however poor or rich they are.

“We began this book ministry seven years ago, in 2013, in partnership with UK charity BookAid who send us container loads of books. The people who come share testimonies of the difference the books make in their lives.”

One testimony, from Rev Mailumo of Cocin Rukuba Road, is typical. He said “The books I have bought in the past have given me materials for preaching and for caring for my congregation. I’m able to get the books I want in Jos, I don’t need to travel away from home.” 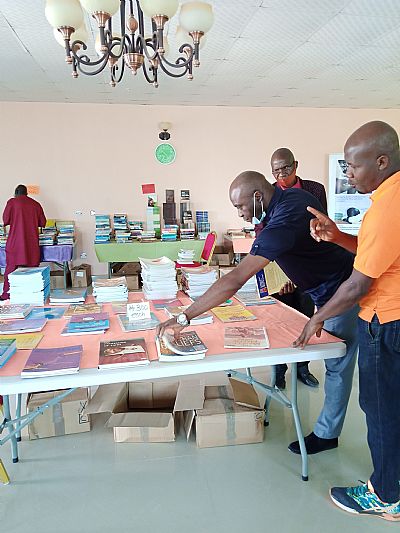 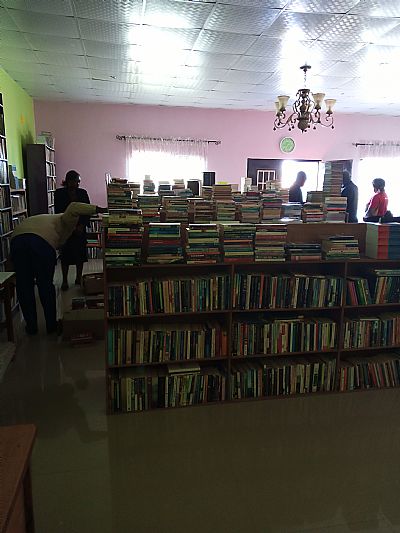 16 December 2020Christ the antidote to hardship and violence 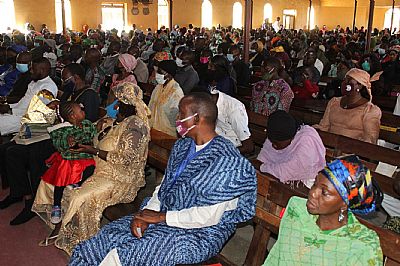 Of these 1,008 chose to be tested for HIV/AIDS and just two people tested positive. Sixteen hundred people rededicated their lives to Christ and another 84 made first commitments.

Ninety-five per cent of those who tested also chose to join life sharing groups in their churches, committing to holding each other accountable for their relationships with God and their behaviours.

“We are living in hard times in Nigeria at the moment. Though we have not had large numbers of deaths from Covid, we are in the midst of a very hard 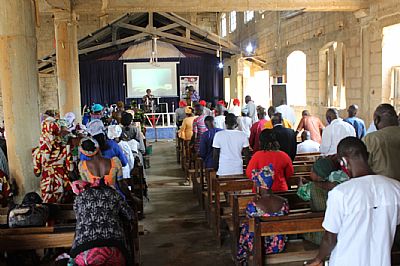 recession as well as continual terrorist killings. Everything is going up in price, but salaries are not matching. We see the rich getting richer,” said international coordinator Tassie Ghata.

“People are feeling the effects and turning to Christ. When they hear our social righteousness message they realise being a Christian is not just going to church on Sundays. It means giving their lives to Christ and behaving as he requires in all aspects of their lives.”

Please pray for life sharing groups: members remain committed to meeting regularly, trust each other to share openly, listen to each other and show understanding and support, hold each other accountable for behaviours and growing relationship with God.

16 December 2020Students and learning are suffering

Volunteer teams have been unable to visit schools since April because of the pandemic.

Virtually all Nigerian schools and universities, both private and state, have been closed since March and will not reopen until the spring.

Learning has suffered as schools have not been offering online lessons; most students and teachers don’t have the internet at home. Instead government radio stations have been providing essential lessons for secondary school pupils only.

This means our volunteer teams have not been visiting schools to share the gospel and test pupils for HIV/AIDS as we usually do.

The Yola team was able to visit two schools in November, sharing the gospel with 192 students and encouraging them to live lives that honour God.

During these visits 103 students chose to be tested for HIV/AIDS; one person tested positive and is now being supported by their school.  One hundred and twenty four students rededicated their lives to Christ and nine made a first commitment.

“This year has been tough for students and their families. Parents have been back at work since October and so children are on their own at home or being cared for by relatives, usually grandparents,” said international coordinator Tassie Ghata.

“We are hearing increasing stories of rapes and crimes; families are struggling financially. Only senior people in government worked between April and October so there was not much support. Though all government staff are now back at work, services are not yet functioning well.”

Please pray for Nigerian school children and their families: support for those who have been harmed, incomes to feed the family and pay back debts, schools to restart in the new year.