Leaders from 64 different churches have committed to tackling sexual and gender-based violence in their congregations and communities during 2021.

They will be talking about sexual and gender issues from their pulpits, explaining that women and men are equal before God, and role modelling gender equality language and behaviours.

Cocin churches in Vom have agreed to invite the Jos volunteer team to minister during Sunday services following a meeting with the Vwang District Regional Church Council.

The volunteers will begin visiting the more than 40 Cocin churches in the district from January. They will share the gospel of social righteousness, calling on congregations to lead righteous lives that honour God, as well as counselling then testing everyone who wants to know their HIV/ AIDS status. 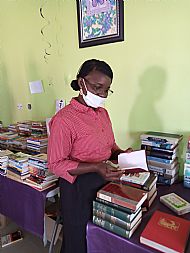 Jos residents arrived in their droves to buy books during our annual book fair where we sell Christian books at very affordable prices.

People came not just from Jos, but also from nearby towns and villages as our book fair is highly regarded by local people.

Christ the antidote to hardship and violence

Students and learning are suffering

Volunteer teams have been unable to visit schools since April because of the pandemic.

Virtually all Nigerian schools and universities, both private and state, have been closed since March and will not reopen until the spring.