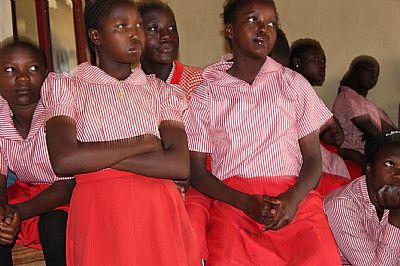 Volunteer teams have visited just one secondary school during January and February due to the presidential elections.

Many private and public schools closed for almost a month to prevent pupils getting caught up, on their journeys to and from school, in unrest associated with the electioneering period.

Those that remained open moved their mid-term break to the middle of February to coincide with the elections. The university lecturers two-month strike, which ended early February, has also caused disruption in secondary schools.

The one secondary school the Jos team visited is a neighbour and shares a wall with our headquarters; it is the first time Grace & Light volunteers have visited the school.

One girl stands out for the team. A 16-year-old, she said she had run away from home and was staying with her boyfriend, an older man, in his house. Her widowed mother was struggling to care for the family and assumed her daughter was staying with relatives or friends.

Volunteers are now counselling both the girl and her mother to help rebuild their relationship as well as trust with the school.

In total 157 pupils heard Grace & Light’s message of social righteousness at the school. Of these, 104 chose to be tested for HIV/AIDS with none testing positive. Forty-eight rededicated their lives to Christ and another 20 made a first commitment.