Coordinated attacks on Christian farming communities around Jos since mid-June, hundreds are dead, with the area remaining tense. 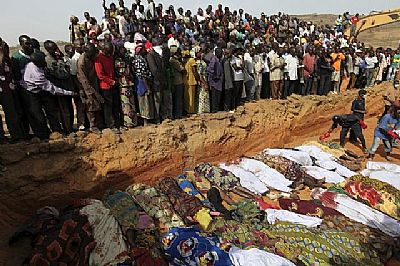 Violence against farming communities across the middle belt of Nigeria, including around Jos, has escalated following a call by Fulani cattle herders for West African Muslims to join their jihad and regain land they claim to have lost back in the 1800’s.

Over three days in late June more than 50 villages were attacked in a campaign of ethnic and religious cleansing, homes, businesses and churches burnt to the ground and those unable to flee were murdered. The majority of victims were women and children.

These attacks are coordinated, well planned, systematic and deadly. The attackers are armed with AK47’s and rocket launchers, while villagers have basic weapons to defend themselves.

During one attack villagers captured an attacker who turned out to be a Christian government soldier paid by Fulani to carry out the violence.

Grace & Light is impacted through our member churches in Mangu, Miango, Riyom, Bokkos and Barkin Ladi where church buildings have been burnt and congregations scattered. We are grateful no volunteers have been killed or injured so far, though families and friends have been.

Grace & Light’s headquarters team are looking for practical ways to support survivors living in camps around Jos including donating items from our charity shop.

Travel is still difficult with the militia stopping vehicles and murdering occupants; recently including a local pastor and his wife. Schools are also closed and exams disrupted.

International coordinator Tassie Ghata and her family have had students staying with them for three weeks while their boarding school was closed; they are the children of long-standing friends.

Please pray for those suffering in Nigeria and also lobby your MP for the UK government to step in with humanitarian aid and political influence to halt the insurgency. More than words are needed.

The Christian charities CSW and Aid to Church in Need are documenting the violence and deaths. Read their reports at Nigeria Sees 106 Attacks by Herder Militia in Central States and Nigeria: A New Emergency.

UK MPs are encouraging the government to intervene to stop the violence and support victims of the atrocities. MP Jim Shannon tabled questions in parliament in May and the issue was presented in parliament in July.