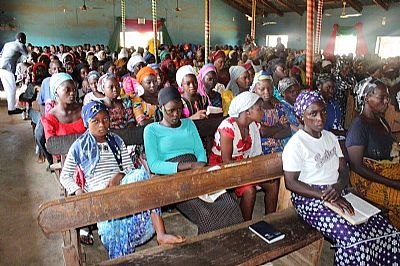 “Our message of social righteousness continues to speak to the hearts of people, causing them to change their lives and live better,” said Tassie.

“During counselling at one church a woman, who is studying at a theological college, began crying and saying she is not living up to what she professes. She had been sleeping with her teachers and neighbours and didn’t realise how wrong this was.

“She made up her mind to change and to speak with her lecturers so they change also, a brave thing to do. Grace & Light continues to support her.

“At another church we met a young woman studying at technical college who said she was sleeping around to support her widowed mother and pay her college fees.

“We taught her how to run a business, so she earns this money in a way that honours God. Now she goes to the wholesaler and buys snacks and women’s hygiene items to sell to other students at her college and is able to support herself and her mother. During the holidays, when there is not college, she will bake homemade goods and sell them in the local market.”

Between December and February volunteer teams visited 24 churches, sharing the gospel with 3,153 people. Of these, 1,539 chose to be tested for HIV/ AIDS and eight were positive.

Ninety-two per cent of those tested chose to join life sharing groups in their churches; 760 rededicated their lives to Christ and 168 made a first commitment.