Tony Sudan shares one of the many stories he witnesses of God convicting and changing lives. 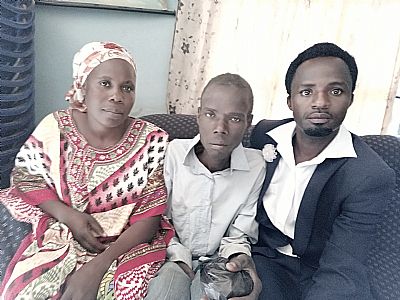 The woman you see in this picture is Martha Yakubu. She lives in the same community as Tumba Francis, the young man in the middle. He worked as painter but fell sick and was unable to work.

Tumba is a Cameroonian but works in Nigeria. He was living with his friends and sharing a room, but when they saw that his health was becoming worse, they kicked him out of the house - he has no one else here in Nigeria.

Martha was coming back from the farm and she saw Tumba under a tree sleeping, he has no one to fend for him, he goes begging in order to eat.

Martha recognised him as one of the painters and she decided to take him to her house. She gave him food to eat and finally brought him to our Grace & Light office Yola for HIV testing since she suspected that he had HIV.

After counselling and sharing the word of God with him, Tumba agreed to give his life to Christ. He tested positive and and began taking anti-retroviral drugs after I took him to the hospital.

I also gathered those in the neighbourhood and spoke to them about giving him support, which they agreed to do.

However, Tumba didn’t make it, he passed on to glory. We are he received Christ before he died and we are confident that he has gone to be with the Lord.