Thirty people from 12 churches completed new volunteer training in Bauchi during September. Most will form a new team centred on Bauchi, the remainder will strengthen three existing teams. 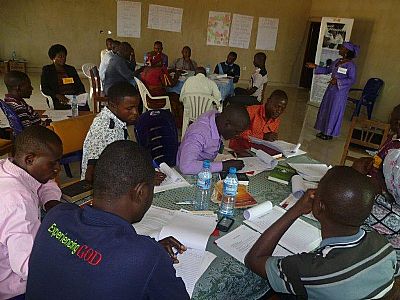 Over four days, from 15-18 September, they developed and practised the skills they will use when visiting local churches to share the gospel, provide HIV testing and counselling, establish life sharing groups and provide ongoing support for those who test positive.

Twenty-two of the volunteers will join the Bauchi team. Its four founding members trained in Jos earlier in March. Bauchi is a city in north east Nigeria and the capital of Bauchi State. It is located on the northern edge of Jos Plateau a 90 minute drive from Jos.

The other volunteers will join existing teams that are active: two will join the Jos team, two the Yola team and four the team in Langtang, a town also in Plateau State.

International coordinator Tassie Ghata, who led the training, said: “We are very pleased to have an strong team based in Bauchi. Churches there are interested in our work and until now members of the Jos team have been regularly travelling to Bauchi to work alongside the four founding members.

“The volunteers we trained embraced our messages of openness and social righteousness. Many said their own understanding of how to live as a Christian had changed during the training. Things they thought were okay spiritually and physically they now know are not okay and so they are changing their behaviours.”