During April to June 11,500 people heard Grace & Light’s gospel message in 30 churches during Sunday services, 218 accepted Jesus Christ into their lives, and almost 800 rededicated their lives to God. 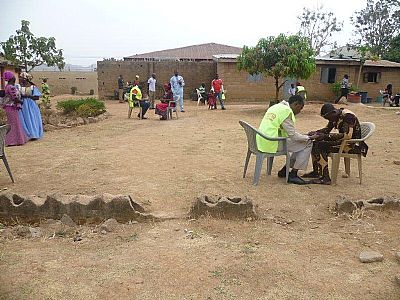 Five volunteer teams were active -  Jos, Yola, Tafawa Balewa, Mangu and Bauchi – following new volunteer training in Jos in March and a monitoring visit to the Tafawa Balewa team to encourage them.

Over the three months the teams tested 2,741 people in churches, of whom 2,602 committed to becoming Grace & Light members and joining a life sharing group in their church. Just 24 people, less than one per cent, tested positive.

International coordinator Tassie Ghata said: “The big change we are seeing is that people are willing to be open about their HIV status. Before they wanted to keep it quiet and not even tell close family members including spouses and children. If they didn’t tell the most important people in their lives they were unlikely to change their behaviours.

“We also have congregations and church leaders commenting on our messages of social righteousness, love, openness and forgiveness. They say these are messages that touch them deeply and that they don’t usually hear in their churches.”