Leaders at one church Grace & Light volunteers visited during July were unhappy because they thought the visit was just about HIV and AIDS. 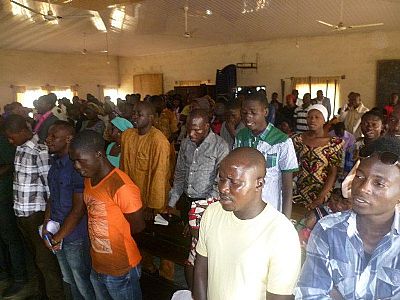 However, when they realised the visit was also about social righteousness and helping members to turn their hearts to God, they became enthusiastic supporters.

“Initially the elders thought it wasn’t necessary to test members,” said international coordinator Tassie Ghata. “However, when they saw many people rededicating themselves to serve the Lord better, they changed their minds.

“Now the elders are asking how can we join Grace & Light and support your work. This shows the power of the gospel for reaching out to people.”

Active teams during July were Zing, Zaria, Yola, Lafia and Jos. They visited seven churches and tested 670 people. Another seven people were tested in HCT clinics.

Ninety-two percent of those tested in churches chose to be open and join life sharing groups. Just five tested positive. Fifty-three people committed their lives to Christ for the first time and another 216 rededicated themselves to God. In one church all people tested chose to be open.