In many of the churches Grace & Light volunteers revisit they find members who have chosen to be open continuing to live healthy lives many years after testing positive. 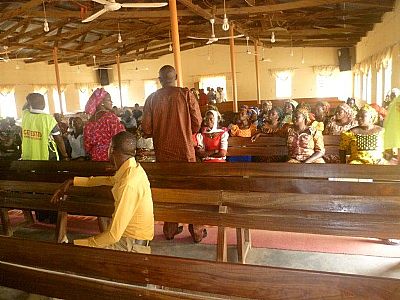 “They continue to be open and share what is happening in their lives, so their life sharing group members can support and pray for them,” said international coordinator Tassie Ghata. “It is a great encouragement for our volunteers.”

COCIN Abattoir has been involved with Grace & Light from the beginning. Each year the Jos team visit to share the gospel and test. In June 328 peole were counselled and tested with the majority choosing to be open and share their results.

“This church attracts students as it is near the university. Each year the majority have never tested before. Even though students are a high risk group the positives were low.”

Between them the Jos, Inye, Abuja and Bauchi teams visited seven churches during June testing 829 people. Another seven people visited the Yola office for testing.

Of those who tested in churches, 80% chose to be open about their status and join a Grace & Light life sharing group. Ninety commited their lives to Christ for the first time and another 228 rededicated their lives to God. Just seven were HIV positive.