Church visits during May and June

Volunteers from Jos, Abuja, Zing, Ankpa, Gombe and Zaria visited 14 churches and tested 1,456 people during May and June. 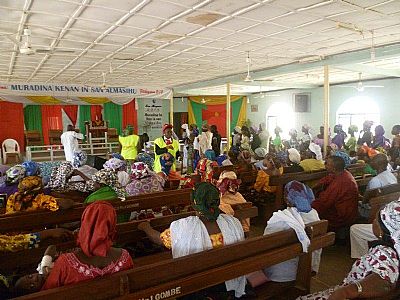 Of those tested just 22 (1.5%) were HIV positive and 87 per cent chose to become Grace & Light members and join a life sharing group.

Plus 66 people gave their life to Christ for the first time and 201 rededicated their lives to him.

The first was at St Pauls Anglican Church in Abuja where those being counselled during testing said again and again ‘we didn’t want to know because we feared being positive’.

Tassie said, “This was our first visit to St Pauls. Though they were scared, on that day they were open to testing. And actually no one was positive.”

Her second memory is during a visit to COCIN Kadima church in Jos, which the volunteers have visited many times. Issac Dawo asked if he could become a volunteer and has since joined the team.

“He is the first person to volunteer, usually we ask people during church visits. Issac said he had seen we are very consistent and that is why he volunteered,” said Tassie.