Volunteer teams confront complacency in church congregations with powerful messages about how God calls us to live and witness in our communities. 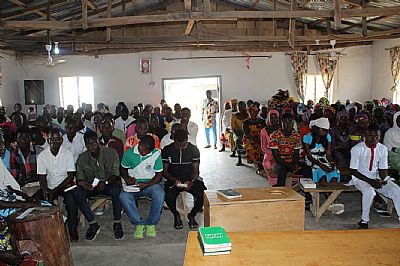 A gentleman at one church stands out for international coordinator Tassie Ghata. After the service he came up to her and was clearly drunk – both by his behaviour and his smelly breath.

“He said that the spirit had been speaking to him during my sermon and then narrated all I had said, before adding today I am giving my life to Christ.”

Please pray for this man and ongoing support from the church pastor. He is an occasional visitor to the church and Tassie has not been able to contact him since as his mobile phone is not working.

At another church Tassie spoke with a street trader named Dorcas, a seller of grain. At the end of the service she came to the front crying and saying she had been convicted to change her business practices – she hadn’t realised they were wrong.

“She had two special measures made for her. One was slightly bigger and allowed her to cheat the grain growers she bought from. The other was slightly smaller for cheating her customers. She now knows this is wrong and says she won’t do it again.”

Tassie added that volunteer teams have been seeing increasing numbers of young people confessing sexual immorality in churches. They are hearing similar stories across different congregations, denominations and areas.

“During our counselling girls who have made Christian commitments and been baptised are confessing to having abortions. They feel everyone is doing it and say they didn’t know it is not what God wants. From their pulpits they don’t hear about how to live righteous lives that honour God and so don’t understand what he expects of them until our volunteer teams visit their church.”

Volunteers teams from Jos and Yola visited 16 churches during January and February. They shared the gospel with 3,854 people of whom 1,308 chose to be tested and know their HIV status. Five people tested positive.

Most of those who tested – 1,170 - chose to be open with their status and joined life sharing support groups based in their churches.

Significant numbers made a Christian commitment; 142 were new converts while 688 rededicated their lives to Christ and promised to live according to gospel values.