People in rural communities appreciate Grace & Light bringing the gospel of social righteousness and HIV/AIDS testing to their villages. 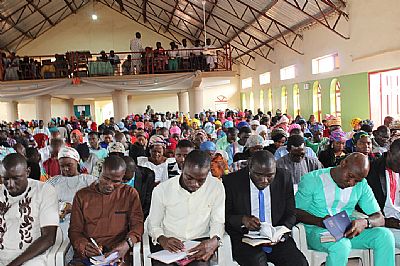 As with our schools’ ministry, volunteers have been expanding our churches ministry into rural villages and ministering to people who have not heard our message of social righteousness or been tested for HIV/AIDS.

“Again and again, the feedback from these people is thank you and we’re happy you are bringing the gospel and testing to our village,” said international coordinator Tassie Ghata.

“Unsurprisingly, we’ve seen an increase in the number of people who didn’t know they were HIV positive. They are now on drugs programmes and supported by their churches.”

Volunteers teams from Jos, Yola and Bauchi visited 17 churches between October and December. They shared the gospel with 3,869 people of whom 1,038 chose to be tested and know their HIV status. Seven people tested positive.

Most of those who tested - 1,015 - chose to be open with their status and joined life sharing support groups based in their churches.

Significant numbers made a Christian commitment; 90 were new converts while 586 rededicated their lives to Christ.