17 August 2018
People are changing their hearts

Church members continue to commit to changing sexual behaviours and corruption when they hear Grace & Light’s message of social righteousness during church visits. 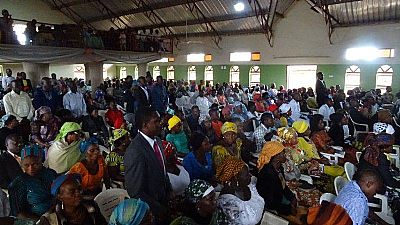 uring counselling our volunteers hear many stories about sexual behaviours that people thought were okay because everyone was doing it. It isn’t until they hear Grace & Light share about how Christ expects us to behave that they commit to changing and leading gospel-centred lives.

“We hear time and time again that they feel, because everyone is doing these things, they are not a sin,” said international coordinator Tassie Ghata. “Through our preaching we help them see their lives from God’s perspective.”

Corruption in the workplace also continues to be something people commit to changing during the church visits. Many say they believed it was okay to clock in for a full day even though they were starting late and leaving early, or lie about buying low and selling high.

“They think it is only the big guys who are corrupt. Once we speak they realise it is also them and that their behaviours are wrong,” said Tassie.

The Jos, Yola, Bauchi, Lafia and Michika volunteer teams visited seven churches during July, sharing the gospel with 1,763 people. Of these, 466 chose to be tested for HIV/AIDS and 436 joined life sharing groups where they will support each other to live lives of social righteousness.

Two people tested positive for HIV and will receive ongoing support. Forty-three gave their lives to Christ for the first time and another 281 rededicated their lives.