Following our sponsored walk in Southern England we are more than halfway to the funding target for our Nigerian schools’ project. 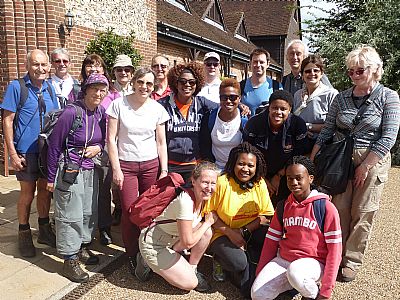 Thank you to everyone who supported Grace & Light by joining us for the walk on the day, or by supporting our walkers.

In total 21 people walked with us for Grace & Light including five trustees and their partners – Isabelle and Mark Hopkins, Ed Greening, Sarah and Peter King, Fola and Akin Ogunyide and Jo Ann and Mike Eastgate.

Special thanks to AMEN trustees Trish Chatfield who helped organise the walk, and Chris, her husband, who provided and drove the support mini bus.

Highlight for Peter King was meeting up with a friend he hadn’t seen for 29 years, who also knows Trish and Chris Chatfield and was invited by them. “We exchange Christmas cards each year and since our last meeting have had children who are now grown up. Richard and I were able to catch up and carry on where we left off 29 years ago. It was good to see him again.”

Chatting to supporters and new people was the highlight for UK chair Ed Greening. “It was nice to meet and chat with the folk Trish and Chris brought along.” 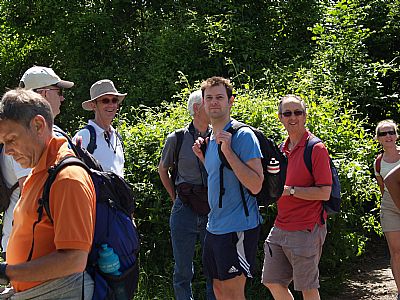 Nigerian chair Mark Hopkins enjoyed both catching up with supporters and also the beautiful countryside we walked through. “I talked with most people and each conversation was enjoyable. The time flew, it felt like we were finishing almost as soon as we began. The beautiful and varied scenery from vineyards to a stately home and woodland was also splendid.”

We followed our planned route, starting at Denbies’ vineyard in Dorking, walking up through the vines onto Ranmore Common and then through woods and farmland to Polesden Lacey for lunch where we picnicked outside in the sunshine.

In the afternoon we walked back to Denbies through the shady woods of Norbury Park, more farmland with grazing horses, the pretty village of West Humble and more vines, this time on the flat.

The day ended with afternoon tea outside and Nigerian Chair Mark Hopkins presenting certificates to each walker as a thank you for their efforts.

In the first six months of 2017 the Jos and Yola teams have visited eight schools, sharing the gospel and social righteousness with 2,935 students. Of these 1,217 chose to be tested for HIV/AIDS with two students testing positive.

During the visits 596 students rededicated their lives to God and 297 made a first commitment. The two teams will continue to visit secondary schools in their areas in the remaining months of 2017.