Praise God that the thieves who broke into our Nigerian office have been caught and the goods they stole recovered by the police, says international coordinator Tassie Ghata. 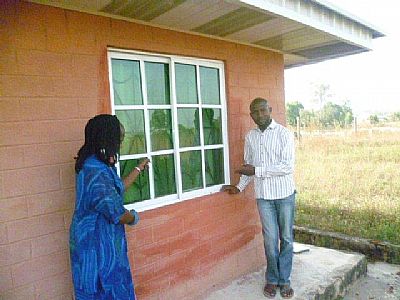 Five men broke into the building at 3am on 1 October by pulling a window out of its frame. They broke open filing cabinets, scattering books and paperwork over the floor as the searched for valuables.

Worse, they threatened to kill our security guard Solomon Ibrahim if he did not hand over money and mobile phones. When they turned their backs Soloman ran for his life and so he was unharmed, for which we are grateful. The thieves did leave with Soloman’s mobile and wallet as well as Dawuleng’s laptop.

Amazingly, one of the thieves came back to the area a week later and local residents caught him breaking into a nearby house.  We are glad the crowd did not hurt him, because he confessed to being part of a gang and so they handed him over to the police.

The police caught the rest of the gang, who were taken to court and found guilty, and did recover the laptop. Grace & Light bought a new phone for Solomon and replaced his stolen cash so he did not suffer.

Photo: Tassie Ghata and Solomon Ibrahim beside the window that was broken during the robbery