Annual general meeting reviews significant achievements of 2013, sadness at the deaths of supporters and members, and hopes for 2014. 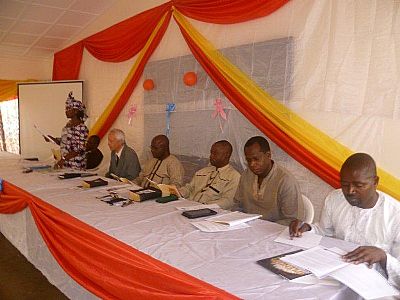 Supporters from across Nigeria joined members, volunteers and staff for our AGM in Jos on 15 March to review finances, achievements and activities in the coming year.

Last year our 19 active teams visited 112 churches in Nigeria and Zambia and tested over 10,792 people, the majority of whom joined Grace & Light life sharing groups. Of those we tested just 145 were HIV positive.

Our 2013 income was higher than in 2012 thanks to generous supporters, our books sales with books donated by the UK charity BookAid, and the tenth anniversary celebrations.

However our costs were also higher, which meant we weren’t able to run all the volunteer training planned or visit each volunteer team.

International coordinator Tassie Ghata said “We noticed with sadness that apart from the teams who are privileged to have Grace & Light offices nearby, volunteer teams struggled to visit more than six churches each in the year. We hope in 2014 to improve the support we give these teams through refresher training and encouragement visits.”

Our hope in 2014 is to significantly increase activities, visiting 200 churches and testing 15,000 people. We plan to run two volunteer training programmes with up to 100 people forming five new teams. Plus we want to visit 15 of our teams for encouragement, run four events to empower team leaders, four workshops for HIV positive members, and establish Grace & Light in two new areas.

Tassie said “Please join us in praying that we will achieve all this in God’s strength and that he will provide the finances and other resources we need.”

You are welcome to download our prayer diary and pray regularly for our work as well as joining our Facebook group and keeping up to date with our activities.