Dying to sin and living to righteousness is 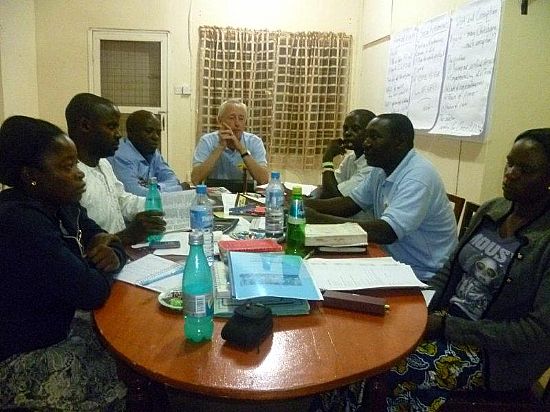 Founder Mark Hopkins introduced the theme – based on 2 Peter 2:24 - during the annual leadership retreat at Miango Rest Home in Jos in early November.

Speaking at the retreat Mark exhorted staff to commit to dying to self and sin so they could arrive at social righteousness.

He said: "Through sharing in Christ's death and resurrection we become the righteousness of God (2 Cor. 5:21) and thus in our ministry can fight with 'weapons of righteousness for the right hand and the left' (2 Cor. 6:7). This is righteousness in reality, not just status, and touches everything in life - so social righteousness too."

During the retreat the Grace & Light staff members in Nigeria evaluated achievements during 2013 and agreed goals for 2014.

“We are very pleased with how effective our 18 active volunteer teams have been, including our three new teams. Every Sunday during 2013 they have visited at least one church in Nigeria and tested almost 10,000 people,” said international coordinator Tassie Ghata, who also spoke at the retreat.

“However, we are disappointed we have not achieved the target we set ourselves of testing 20,000 people and establishing six new teams by Christmas.

“Partly this is because we’ve not been able to give teams the support that keeps them motivated including monitoring visits and regular refresher training, as we need more staff and finances than we have at present.“