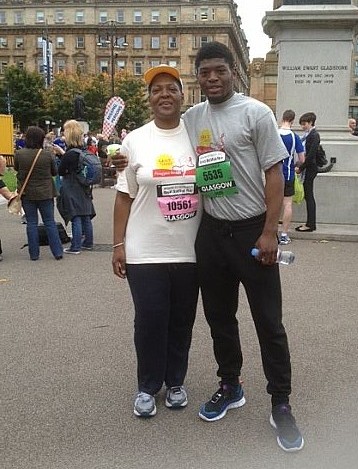 They were among 23,000 athletes who started the race. Alex finished a very credible 5,743th in two hours five minutes, while Joanna was 8,865th in three hours 18 minutes.

The race began in the City Centre in George Square, crossed the River Clyde via Kingston Bridge and went south to Bellahouston Park before turning towards the quays and art museum, then back into the centre at Glasgow Green and Nelson’s Monument.

“The atmosphere was amazing, spectators were very encouraging and there was a real sense of togetherness with the other runners,” said Joanna.

“Alex was quite overwhelmed by just how many runners there were and the scale of the race. He feels he has achieved something worth doing.

“I did walk much of the route as I have knee problems. At 30 yards to go, when I could see the finish line, I found the energy to pick up my legs for a little sprint.”

This was Alex’s first long-distance race, while Joanna is a marathon and fundraising veteran. “Alex and his younger brother Lamarr have grown up with their parents running marathons around the United Kingdom and overseas.

“When he turned 18 Alex decided he’d like the challenge of a half marathon for himself and chose Glasgow so he could also visit his aunt who lives there,” said Joanna.

Joanna is a lawyer, member at Chatsworth Baptist Church in West Norwood, and a Grace & Light supporter since the charity was founded. Alex is in his last year at Christ the King Sixth Form College in Clapham.

Ethiopian former Olympic and World champion Haile Gebrselassie was first across the line in a new course record of 61 minutes and nine seconds. Kenya’s Emmanuel Bett came second with a time of 61 minutes 40 seconds.