Local churches are expecting to see husbands, fathers and sons returning to church as their men’s outreach work strengthens following a social righteousness workshop near Mangu. 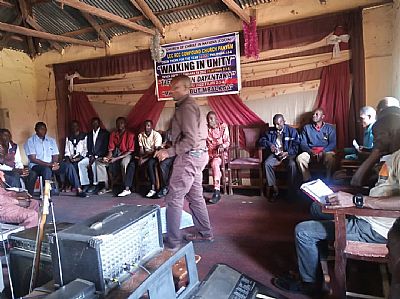 Eighty-seven men’s fellowship leaders in 19 COCIN churches joined Grace & Light’s workshop in mid-July. They left with a deeper understanding of their responsibilities in their churches and a commitment to fulfil them.

Panyam Regional Church Council invited Grace & Light to run the workshop in the hope it would reinvigorate their men’s outreach in this local area. They were excited by the response they saw in attendees.

“We have been delivering our message of social righteousness during Sunday services in many of their churches, so the men already knew and trusted us and were willing to share their challenges, ”said international coordinator Tassie Ghata.

During the day-long workshop, the men discussed sexual and gender based violence, work and corruption, the politics of righteousness, and their roles in their churches.

“Their congregations experience all the sexual and gender issues as they are in a rural area. They promised before God to treat their wives better and to take this message back into their men’s fellowships,” said Tassie.

“With politics, they believed this and church were exclusive; they could be involved in church or politics, but not both.

“After we spoke they could see politics and church can co-exist, as long as both are based on God’s righteousness. They have promised to vote in the next elections based on Christian values rather than payment from politicians.”