Supporting people as they open up about their sexuality

Homosexuality and bisexuality are taboo subjects in Nigeria. There is great social stigma, including in churches, so people are not open. 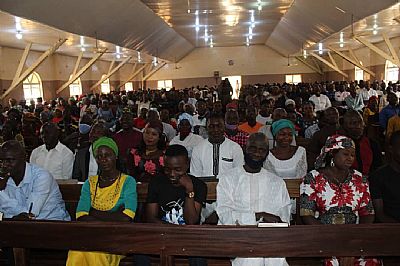 Instead they pretend to be heterosexual, lying to themselves and their loved ones, marrying and having children, feeling stressed and guilty, confused about whether God loves them and their lives are worth living.

“It takes a great deal of courage to be open about sexuality in church,” said Tassie Ghata, Grace & Light international coordinator. “People fear the same condemnation that those living with HIV/AIDS faced when we started Grace & Light almost 20 years ago.

“We thank God people are beginning to be open with us when we minister in churches. Over the last couple of months three men in two churches have shared they are homosexual or bisexual during counselling and asked for support.

“They have each rededicated their lives to Christ and we are following up in partnership with their church ministers. ”

Four volunteer teams have been active during June and July. Between them the Jos, Yola, Lafia and Jalingo teams visited 13 local churches..

In total these teams shared the gospel of social righteousness with 2,634 people and tested 530 for HIV/ AIDS. Two people tested positive and are receiving ongoing support and care.

Of those who tested 509 people (96%) chose to join life sharing accountancy groups in their churches, 453 people rededicated their lives to Christ and another 33 made first commitments. Just 21 people chose to keep their results confidential.