Thousands of teenage girls have better understanding of how to deal with sexual predators following talks at Girls Brigade camps over Easter. 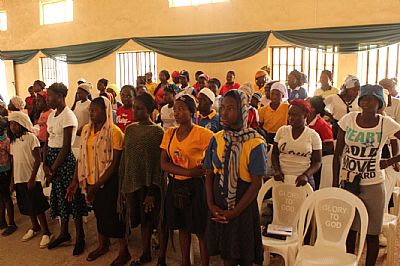 Grace & Light’s Jos volunteer team spoke at three different Girls Brigade camps, each with 1,000 girls, giving an interactive presentation followed by counselling for anyone who was being sexually abused.

“We talked about how to recognise sexual and gender-based violence and the tricks men use to take advantage of girls when they are vulnerable,” said international coordinator Tassie Ghata.

“We also shared lots of ideas about how to conduct their lives so men see them as strong and confident, rather than as easy targets who can be manipulated.”

Many girls came forward for counselling at each of the three camps, sharing their experiences of incest with uncles, brothers, neighbours and family friends.

Many also repented of their own behaviours that encouraged the men such as going out with older men for the gifts they would receive.

Others felt trapped. One girl, who was having sex with her uncle, didn’t know how to stop this without upsetting her mother. The mother was aware of what was happening but didn’t want the uncle to be reported to the police, or stigma damaging the family name.