Across Nigeria whole families are in church each Sunday for cultural reasons, it is expected of them. They worship joyfully, listen to sermons about how God loves them, then return to lives that do not reflect what they have sung and heard. 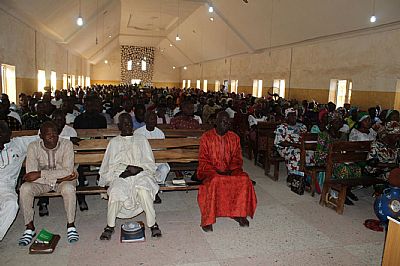 “During our Sunday visits we hear again and again people saying they do not know why they are in church, especially young people,” said Grace & Light international coordinator Tassie Ghata. “They are Christian in name only, they have no idea about how to live lives that honour God, or even that they are supposed to.”

In many churches leaders do not speak about how to deal with challenges such as drunkenness, infidelity, polygamy, sexual and gender-based violence, greed, corruption, cheating, et cetera. Grace & Light brings a different message.

“When we visit churches we highlight these issues. Many people are shocked to hear our message. They are convicted; we hear so many confessions and desires to change their lives when they come for counselling.

“There are often a small number of angry people who don’t want to face the corruption in their lives and who do not want to change. We support them also.”

One example is a husband who hid extramarital sex from his wife and hadn’t realised he was HIV positive until they both tested during a Sunday service.

Though the wife was deeply hurt and wanted to leave him, they both agreed to have counselling at our Jos office. In this particular church the pastors were not skilled counsellors and the husband would have been disciplined for his sin rather than helped to change his life.

Five volunteer teams have been active during March, April and May. Between them the Jos, Yola, Gombe, Jalingo and Biu teams visited 24 local churches. We are delighted the teams in Gombe and Biu have been able to restart church visits after quite a few months of inactivity due to the insurgency.

In total these five teams shared the gospel of social righteousness with 7,487 people and tested 1,006 for HIV/ AIDS. Three people tested positive and are receiving ongoing support and care.

Of those who tested 946 people (94%) chose to join life sharing accountancy groups in their churches. In total 899 people rededicated their lives to Christ and another 11 made first commitments. Just 60 people chose to keep their results confidential.

The Jos and Yola teams also visit workplaces and prisons as well as testing people who visit our offices. During March to May they shared the gospel with 2,060 people at these places and tested 220 of whom one tested positive.

During these visits 137 people gave their lives to Christ and 15 made a first commitment.