Christians in a rural community commit to living lives that honour God at work and in their homes. 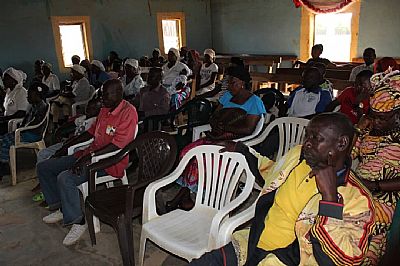 Two hundred and fifty people joined our three day workshop in mid-January at Cocin Chemet, a church in a rural area outside Jos. We looked at what social righteousness means in practice for them.

The community has a number of issues including multiple rape cases. Many of the young people are unemployed even though the village has a lot of agricultural land that is not being used.

“In talking about work and corruption we compared them to the Muslim village nearby where people work hard at farming and explained that what God gives them they need to use,” said international coordinator Tassie Ghata.

“We said nobody should be lying down thinking they are poor, waiting for others to fix their problems. Instead we encouraged them to support each other, share what they have and not suffer alone. We will follow up to see how they do.”

The volunteers also shared that women and men are created equal and both are made in God’s image. They honour God when they treat each other with respect, support each other and work together better.

“People had been keeping quiet when they see things that are wrong. Instead we challenged them to speak out and do something about the rapes and other gender-based violence.