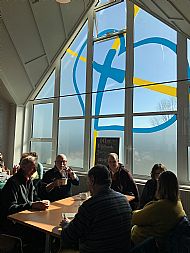 So many highlights for Tassie Ghata of her time in the UK meeting old friends and new supporters from the South Coast to Cumbria near the border with Scotland.

Tassie’s tour started with a drive from London to Cumbria, then York, Sheffield, Doncaster, London, Worthing and back to London – we lost count of the miles.

Fundraising walk along the Arun River

In 2022 our summer walk is raising funds for new volunteer training in Nigeria during the second half of the year.

On Saturday, 11 June we will begin at the war memorial in Arundel, walk up past historic Arundel Castle and Arundel Cathedral, then through Arundel Park and onto the South Downs for fabulous views out to the Channel

International coordinator Tassie Ghata was given the opportunity to explain God’s expectations of political leaders before 500 people during a rally in preparation for elections next year.

During her 60 minute speech Tassie introduced the concept of the politics of righteousness, saying “this is getting involved in government, leadership or influencing societal decisions in a way and manner that brings glory to God and impacts the people positively.”

Where your treasure is, there your heart is!

Grace & Light members are being encouraged to save part of their incomes and invest in each other’s businesses to reduce the poverty in their lives.

Voluntary Savings Action Groups are the new way of doing life sharing accountability for Grace & Light members who choose to share their HIV results after testing in local churches.

Forty-four teachers from 11 private and state secondary schools spent a day in March discussing responses to corruption and poverty in education.

Baptist and COCIN churches open their doors to our volunteers

More church leaders are hearing about Grace & Light and welcoming our volunteer teams to their Sunday services following advocacy visits.

The first visit, in February, was a meeting with 28 pastors from COCIN’s Dadin Kowa regional church council in Jos south.

Christian couples are better at talking with each other about problems in their homes following a couples workshop for their congregation.

Twenty-six couples from an ECWA church in Miango participated in Grace & Light’s sexual and gender-based violence workshop in April.

Volunteers are recommitting themselves to encouraging local congregations to strengthen their relationships with Christ.

Hidden stories, things people are uncomfortable sharing, are emerging during counselling as congregations recommit their lives to Christ.

International coordinator Tassie Ghata has been particularly struck in the early months of 2022 by the number of people admitting involvement in witchcraft and traditional religion. She shares about one person who believes he has killed members of his family.

Parents and their adopted 14 year old daughter are delighted to have her test results following Grace & Light volunteers visiting her secondary school.

The teenager tested positive during February and at last the family knew why she had been suffering with ill health over many years. She had been receiving treatment from a hospital which had been charging for liver treatment that had cost their life’s savings and not been working.